When Do You Usually Write Your Progress Notes?

Thanks to everyone who took my Progress Notes survey.  I clearly struck a nerve: almost 500 of you answered the survey, and left 846 narrative comments!  As I poured through the pages of comments, I heard how many of us find daily progress notes an enormous burden.  Therapists shared their stress, frustration, anger, and even some sadness.  I will be sharing the survey results and some of the comments in a series of articles, starting with this one.

The first survey question asked, “when do you USUALLY write your progress notes for a session?”  As you can see from the chart below, the most frequent response was “I write them right after the session or during my breaks the same day” (34%), followed by those who admitted they write them more than 24 hours after the session (24%). 20% said they wrote notes at the end of the workday, either before going home (10%) or at home after work (10%).  17% stated that they wrote all or most of their notes during session. 6% said they wrote them the next day.  2% said they didn’t write progress notes.* 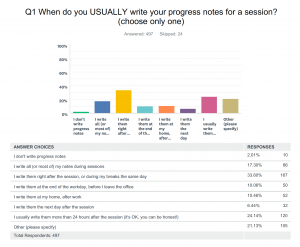 (click on the table above to view more closely)

“I don’t have a real system. About half the time, I write them the next day. The other half of the time I write them within a week of the session. Sometimes, I write them between clients on the same day, and occasionally, I’ve gotten more than a week behind, usually during the holidays.”

“I typically write them the same day and try to do it right after the session . Sometimes things get in the way — like bathroom breaks!  Or a consult with a colleague.  In that case I try to do it at the end of the day….. I hate doing them at home but sometimes I have done that too.”

“I try to write notes right after a session, or during breaks. However, on busy days….I am in need of every bit of downtime between clients.”

“It really varies. I aim for the same or next day but sometimes get behind if I’m not careful to schedule time for my notes….maintaining my ideal timeframe is really hard.”

“I try to write them during session, but when I can’t then I get behind more than 24 hours.”

“I used to write them after session, but [due to] the continued fixed reimbursement rates, …my after-session time is now minimal, as I have had to work 12 hour days, 6 days a week in order to just get by financially.”

“I have a problem with falling behind in notes. If I don’t do them right after, I lag behind, then get stressed.  I take process notes during sessions, then use them to write the progress note … later. I often fall far behind on this and it is a huge source of stress.”

“I am often behind, trying to catch up. I write about half of the notes I should be writing. Lately I’ve been trying to keep notes in the session so I’m done when I’m done. “

“I try to do them at the end of the workday. If something interferes, I usually wind up doing several days in a row at once. I don’t know why this is. If I allow one day to pass, I usually let the next 2 or 3 pass too. Hence my rule is not to leave the office before doing notes, but sometimes it happens.”

“I am not at all consistent. I go for periods without writing any notes then try to catch up by summarizing several sessions at a time. Sometimes I do write them at the end of the day. Mostly I fall behind and skip whole months.”

“I’m super behind. Sometimes I write them right after the session but if I don’t do this (and definitely if I don’t do them before the day is over) it could be a LONG time before I do. This is something I’m trying to fix. It’s a dark cloud always looming over me, these unfinished notes.”

“I might write a few words after the session to jog my memory later (on a good day!) or it might be weeks or more later and sometimes not at all [before I write the note]. Sometimes the words I wrote to jog my memory mean nothing to me by the time I go back and try to turn them into a note.”

“I handwrite a brief note of the session highlights during session, then transcribe into formal note later. Problem is I am years behind in that part.”

“I take process notes during sessions, then use them to write the progress note later.  But I often fall far behind on this and it is a huge source of stress.”

“I’m way behind and it could be months before I try to decipher my scribbled notes and enter a formal progress note. Hoping to change this!”

Respondents did offer tips that had worked for them:

A FINAL NOTE: Some respondents noted that they either did not write progress notes.  Others felt minimal notes were allowable after the intake, with EAP cases, or when the therapist was not an insurance provider.  Remember: Keeping thorough progress notes for each date of service is required by most state laws, ethics codes, and licensing boards regardless of network participation or client type, and even EAP and out of network providers can have notes requested in a licensing or ethics complaint, disability or worker’s compensation case, or treatment review.

Next blog: How much time do therapists spend writing their notes?  Sign up to get the next e-news installment at www.theinsurancemaze.com/contact.

Need help with your notes?  Check out my Progress Notes webinar for tips on how to write quick, thorough notes — click here

*Note: Total does not equal 100% since some respondents endorsed more than one choice.